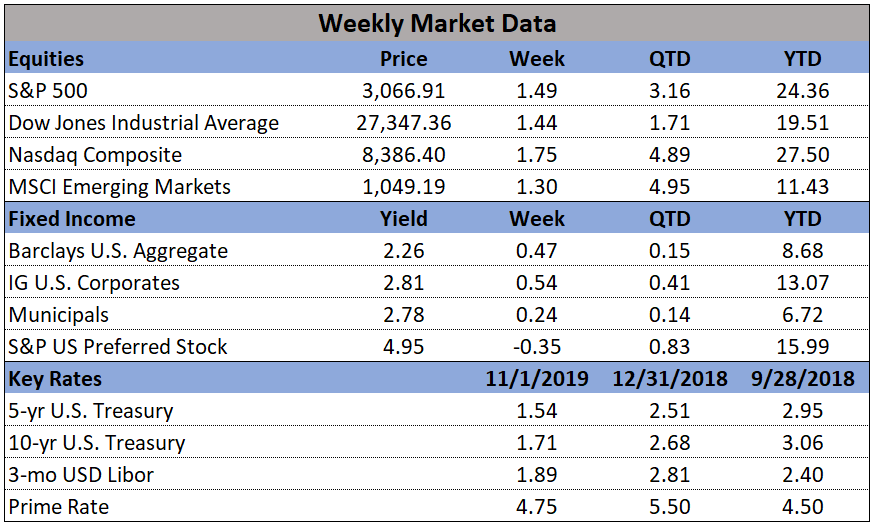 U.S. Markets:  A Friday rally lifted stocks solidly higher for a fourth consecutive week.  The large cap S&P 500 index and the technology-heavy NASDAQ Composite reached new intraday and closing highs, while the smaller cap benchmarks remained below their summer highs.  The Dow Jones Industrial Average gained 389 points, or 1.4%, to finish the week at 27,347. The NASDAQ added 1.7% and closed at 8,386. By market cap, the large cap S&P 500 rose 1.5%, the S&P 400 midcap index added 1.2%, and the small cap Russell 2000 gained of 2.0%.

Commodities:  Precious metals had a third straight week of gains.  Gold rose 0.4% to $1511.40 an ounce, while Silver gained 0.7% finishing the week at $18.05 an ounce.  Oil retraced some of last week’s gain, giving up -0.8% and closing at $56.20 per barrel. The industrial metal copper, considered by some analysts a barometer of global economic health due to its wide variety of uses, declined -0.9%.

U.S. Economic News:  The number of Americans seeking first-time unemployment benefits rose slightly last week, but layoffs remained near their lowest levels in half a century.  The Labor Department reported initial jobless claims rose by 5,000 to 218,000 last week. Economists had estimated new claims would total a seasonally-adjusted 215,000.  The biggest increase in new claims appeared to be in California, where wildfires and power outages kept many people from working. The more stable monthly average of new claims fell by 500, to 214,750.  Continuing claims, which counts the number of people already receiving benefits, rose by 7,000 to 1.69 million.

The Non-Farm Payrolls (NFP) report surprised most pundits by reporting that the U.S. economy created 128,000 new jobs in October.  Hiring was also stronger at the end of summer than previously reported, the Bureau of Labor Statistics stated. The NFP number easily topped the consensus forecast of 75,000 new jobs.  Jobs in leisure and hospitality gained the most, followed by education and health services. The number of jobs in manufacturing contracted the most, most likely caused by the strike at General Motors.  The unemployment rate ticked up to 3.6% from 3.5%, but still remains near its lowest level since 1969 and several demographic sub-groups hit their all-time lowest unemployment rate.

The number of home sales in which a contract has been signed, but not yet closed, rose for a second straight month in September, reported the National Association of Realtors (NAR).  The NAR stated its pending home sales index climbed 1.5%, helped by lower mortgage rates. Economists had expected just a 0.7% gain. Compared to the same time last year, sales were up by 3.9%.  Economists use this number to give an early indication of actual home sales. By region, pending home sales in the Midwest and South showed gains, while the Northeast and West reported declines. Lawrence Yun, Chief Economist for the NAR stated that while the Federal Reserve’s two interest rate cuts this year are helping the housing sector, contract signings would be even higher if more housing was available.

The rate of increase in home prices across the country continued to slow in late summer, according to the latest report from S&P/Case-Shiller.  Their 20-city home price index fell 0.2% in August after seasonal adjustments. It was the first decline since last August. Over the past year, the index posted a 2% gain.  That number is far below the readings in the 5-6% range prevalent at this time last year. In the details, 17 of the 20 large cities tracked by Case-Shiller posted an increase in home prices, with Phoenix now leading the nation in annual home price gains, up 6.3%.  Blerina Uruci, economist at Barclays wrote, “We have seen some stabilization in the Case Shiller index as well as a range of housing activity indicators including home sales and housing starts. As a result, the broader picture suggests that the sector seems on track to stabilize by year-end.”

The confidence of American consumers stabilized in October as trade tensions between the U.S. and China eased and stocks surged.  The Conference Board reported its Consumer Confidence Index edged down slightly to 125.9 in October from a revised 126.3 in September.  Economists had forecast a reading of 128.0. The index of consumer confidence hit an 18-year high exactly one year ago at 137.9. It’s been up and down since then as the U.S. and China appeared closer to a trade deal and then down when talks fell through.  In the report, Americans feel pretty good about the economy right now, but they’re not quite as confident about the future. The so-called present situation index rose to 172.3 from 170.6, but the index that looks at expectations six months from now declined to 94.9 from 96.8.  Nonetheless, overall the report was taken as positive. Lynn Franco, director of economic indicators at the privately run Conference Board stated, “Confidence levels remain high and there are no indications that consumers will curtail their holiday spending.”

The Federal Reserve cut interest rates for a third meeting in a row, but Chairman Jerome Powell said in a post-meeting press conference that it would take “material” change in outlook to justify a further rate cut.  At its policy meeting this week, Fed officials said they would lower the federal-funds target rate by a quarter percentage point, to between 1.5% and 1.75%. Justifying the move, the Fed cited “the implications of global developments for the economic outlook as well as muted inflation pressures.”  In essence, these rate cuts are insurance against a recession. Fed Chairman Jerome Powell said policy would remain steady as long as “incoming information about the economy was broadly consistent” with the Fed’s forecast of moderate economy growth, a strong labor market and inflation near the 2% target.  “We believe monetary policy is in a good place to achieve these outcomes,” Powell said. “We see the current stance of policy as likely to remain appropriate as long as incoming information about the economy remains broadly consistent with our outlook.”