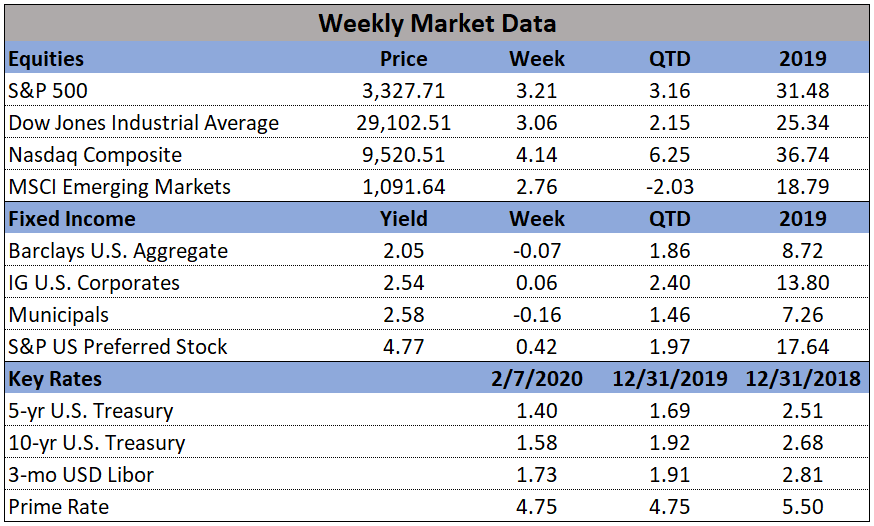 U.S. Markets:  U.S. stocks recorded solid gains as encouraging economic data poured in and it appears, that at least for now, the global economy remains resilient in the face of the coronavirus outbreak.  The large cap benchmarks and the technology-heavy NASDAQ Composite gained the most, establishing new record highs, while smaller cap indexes also finished to the upside. The Dow Jones Industrial Average rallied 846 points to finish the week at 29,102, a gain of 3.0%.  The NASDAQ Composite surged over 4.0%, while the large cap S&P 500 index rose 3.2%. The S&P 400 mid cap index and small cap Russell 2000 rose 2.1% and 2.7%, respectively.

International Markets:  Almost all major international markets finished in the green.  Canada’s TSX rebounded 2.0%, while the United Kingdom’s FTSE 100 rose 2.5%.  On Europe’s mainland, France’s CAC 40 gained 3.9%, Germany’s DAX added 4.1%, and Italy’s Milan FTSE gained 5.3%.  In Asia, China’s Shanghai Composite ended the week down -3.4%, a smaller loss than many analysts had expected. At one point last week, China’s benchmark index had been down almost -10%.  Japan’s Nikkei retraced the prior week’s entire decline, and finished the week up 2.7%. As grouped by Morgan Stanley Capital International, developed markets finished the week up 2.2%, while emerging markets gained 3.0%.

Commodities:  Gold had its first down week out of the last three as equity markets regained upside momentum.  Gold finished the week down -0.9% to $1573.40 per ounce. Silver, which has been notably weaker than gold recently, also finished the week down, losing -1.8% to $17.69 per ounce.  The industrial metal copper managed a slight rebound from last week’s plunge, finishing up 1.4%. Copper is frequently used by analysts as a “barometer” of world economic health due to its wide variety of industrial uses.  Oil fell for a fifth consecutive week, giving up -2.4% to close at $50.32 per barrel of West Texas Intermediate crude oil.

U.S. Economic News:  The number of Americans seeking first-time unemployment benefits fell last week back to a near 50-year low, signaling the U.S. labor market is still holding up despite stiffer economic headwinds.  The Labor Department reported initial jobless claims declined by 15,000 to 202,000. Economists had expected a reading of 215,000. The less volatile monthly average of jobless claims dropped by 3,000 to 211,750.

The Bureau of Labor Statistics’ Non-Farm Payrolls (NFP) report for January shocked all observers.  The U.S. added 225,000 new jobs in January as hiring increased again. The report reflected the resilience in the U.S. labor market even though manufacturing has been in contraction and the economy has softened recently.  Over the past three months, the economy has added an average of 211,000 new jobs—a marked acceleration from last fall and summer. The unemployment rate, meanwhile, ticked up to 3.6% from a 50-year low of 3.5%, but the increase was for the best of reasons: 574,000 more workers entered the labor force.  An ultra-tight labor market has put more upward pressure on wages, though paychecks are still not growing as fast as they usually do when unemployment is so low. The increase in worker pay over the past 12 months rose slightly to 3.1%, but it sits below the post-recession peak of 3.5%.

Private payrolls processor ADP reported non-government payrolls surged 291,000 last month.  It was the biggest monthly gain since May 2015 and, like the government’s NFP report, much higher than the consensus estimates.  Service payrolls jumped 237,000, led by leisure-and-hospitality and health care. Those two industries accounted for over 60% of the services job gain.  Goods-producing payrolls increased by 54,000, led by construction. Mark Zandi, chief economist at Moody’s Analytics stated that warm weather had “juiced” the number.  By firm size, more than ¾ of all new jobs were created at small and mid-sized firms, with small firm employment rising by the most since July 2018.

The Institute for Supply Management (ISM) reported its survey of the services side of the economy, which makes up more than 70% of the U.S. economy, increased to a 5-month high in January.  ISM reported its non-manufacturing index increased 0.6 point to 55.5. Economists had expected a reading of 55.0. The increase was led by a 3.9 point jump in the business activity index to 60.9—its highest level in nearly a year.  Readings over 50 are viewed as positive for the economy, while anything over 55 is considered exceptional. Of the 18 industries ISM tracks, 12 reported businesses were expanding. One caveat, however, analysts noted the survey responses were likely filled out before the Wuhan coronavirus outbreak began having a substantial impact.

In a separate report, ISM said manufacturers grew their businesses in January for the first time in six months.  ISM’s Manufacturing Index rebounded 3.1 points in January to 50.9. The consensus was for a smaller 0.7 point gain to 48.5.  Overall, the increase was a welcome sign for a sector that’s been hit particularly hard by trade tensions and slower global growth.  Most of the components of the manufacturing index increased in January, led by a 9.5-point surge in the production index. New orders, export orders, and imports also rebounded into expansion territory (>50), a sign of some improvement in both domestic and global demand.