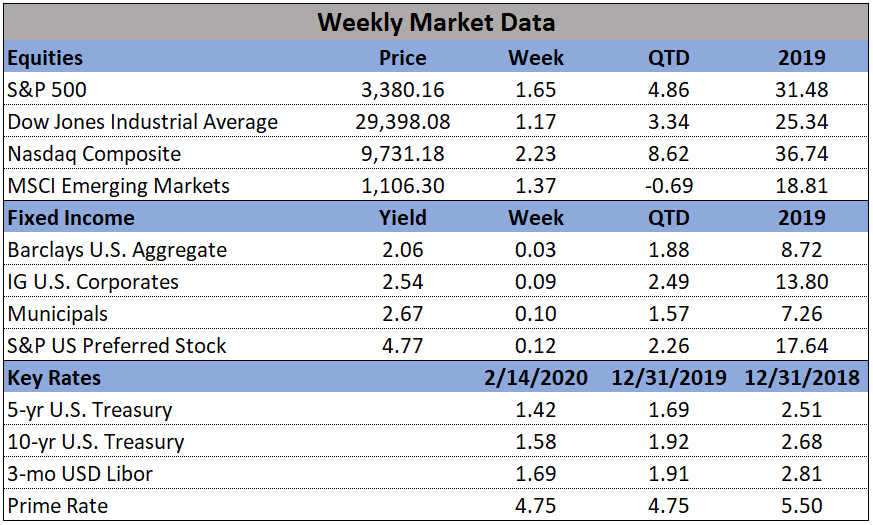 U.S. Markets:  Stocks recorded a second week of solid gains as investors grew more confident that the new coronavirus (officially dubbed “COVID-19”) would be contained.  The gains carried the large-cap indexes and the NASDAQ Composite to new record highs, with the latter receiving an extra boost from the continued strong performance of technology stocks.  The Dow Jones Industrial Average added 295 points, or 1.0%, finishing the week at 29,398, its second week of gains. The technology-heavy NASDAQ followed last week’s surge with an additional 2.2% gain to 9,731.  By market cap, the large cap S&P 500 added 1.6%, while the mid cap S&P 400 and small cap Russell 2000 indexes gained 2.3% and 1.9%, respectively.

Commodities:  Precious metals retraced some of last week’s decline.  Gold added 0.8%, or $13, to finish the week at $1586.40 per ounce, while Silver rebounded 0.2% to $17.73 per ounce.  Oil had its first up week in five, closing up 3.4% to $52.05 per barrel of West Texas Intermediate. The industrial metal copper, viewed by some analysts as a barometer of world economic health due to its wide variety of uses, rose for a second week gaining 1.8%.

U.S. Economic News:  The number of Americans seeking first-time unemployment benefits rose slightly in early February, but remained near their lowest levels in 50 years as the economy continues into its record tenth year of expansion.  The Labor Department reported initial claims ticked up 2,000 to 205,000. The reading was below economists’ forecast of 211,000. The less volatile monthly average of new claims remained unchanged at 212,000. Meanwhile, continuing claims, which counts the number of people already receiving benefits, fell by 61,000 to 1.69 million.  Lewis Alexander, chief U.S. economist at Nomura stated, “Initial unemployment claims have returned to low levels following holiday-related volatility, consistent with our view that the labor market remains strong.”

The Labor Department’s Job Openings and Labor Turnover Survey (JOLTS) reported that the number of job openings in the United States fell to a 2-year low in December.  The number of job openings retreated by over 300,000 to 6.42 million at the end of 2019—the second significant decline in a row. Job openings had hit their highest level on record at 7.63 million just a year ago.  In the details of the report, job openings declined the most in transportation, warehousing, real estate, and education. Furthermore, the “quits rate”, believed to be closely-watched by the Federal Reserve for the state of the labor market, ticked down to 2.5% in the private sector.  Analysts monitor the quits rate for the health of the labor market as it is assumed that one would only quit a job in favor of a more lucrative one.

Small business owners turned more optimistic about sales and profits at the beginning of the year, but they are still struggling to find qualified workers, according to a closely watched survey.  The National Federation of Independent Business (NFIB) reported its index of small business optimism rebounded 1.6 points in January to 104.3. For the most part, business owners weren’t concerned about the impeachment trial of President Donald Trump—the gauge that measures uncertainty remained essentially unchanged.  The biggest worry of small business owners continued to be the shortage of skilled employees available for hire. A quarter of owners stated it’s their number one problem—more than taxes or regulations. Many reported they’ve had to increase wages and benefits to attract talent.

Sales at the nation’s retailers rose modestly last month as Americans spent more on eating out and furnishing their homes.  Retail sales increased 0.3% in January, matching the consensus forecast. Over the past three months, sales were up a steady 0.2%, but slower than the pace in mid-2019.  Notably, building materials, garden equipment, and supplies rose 2.1%, the most in five months, while furniture and home furnishings rebounded 0.6%. The advance in these housing-related categories suggests stronger housing demand at the start of the year.  On a year-over-year trend basis, retail sales were up 4.4% indicating that despite some weakness, consumer goods spending growth is still robust.

Inflation rose just slightly last month suggesting that the Federal Reserve will have no reason to hike interest rates anytime soon.  The Bureau of Labor Statistics reported the Consumer Price Index (CPI) ticked up 0.1% in January, below the consensus of 0.2%. Food prices rose by 0.2%, while energy declined -0.7%--its first downtick in four months.  Core CPI, which excludes food and energy, increased by 0.2%. The cost of shelter, medical care services, apparel, and education all increased last month, while the price of drugs and used vehicles fell. Year-over-year, the CPI increased 2.5%--the most since October 2018, but still historically low.  Overall, the report shows that consumer price inflation remains subdued, supporting a continued easy monetary policy stance from the Fed.

Federal Reserve Chairman Jerome Powell offered testimony to the House Financial Services Committee this week in which he stated that some of the forces that held back U.S. economic growth last year have eased, but risks to the outlook remain, particularly from the coronavirus.  “We are closely monitoring the emergence of the coronavirus, which could lead to disruptions in China that spill over to the rest of the global economy,” Powell said. The U.S. central bank cut interest rates by a quarter percent at three successive meetings last fall, bringing its benchmark rate down to a range of 1.5-1.75%.  Powell stated that he believed the current accommodative stance of policy was still appropriate to support growth, but stated, “If developments emerge that cause a material reassessment of our outlook, we would respond accordingly.”