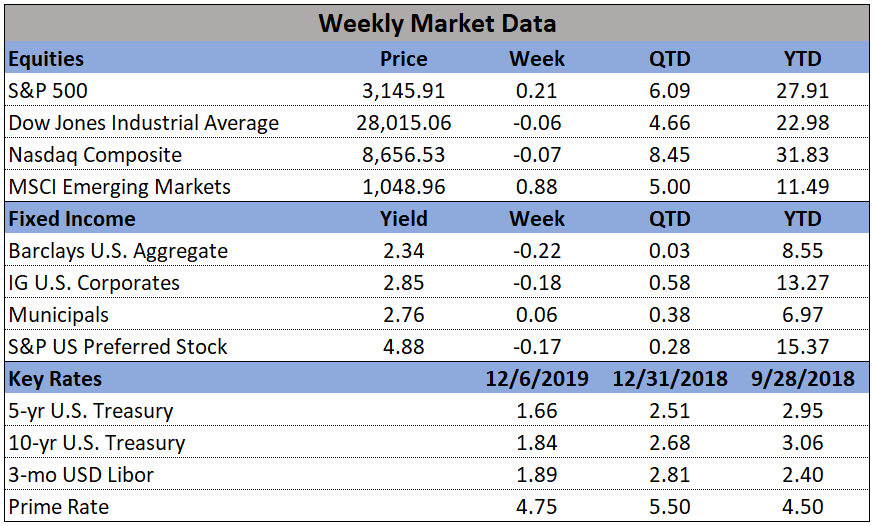 U.S. Markets:  The major U.S. benchmarks ended the week mixed after a strong jobs report sparked a rally at the end of the week.  The smaller-cap benchmarks outperformed their larger-cap brethren for a second consecutive week. The S&P 400 mid cap index led the way rising 0.6% followed by the small cap Russell 2000 and S&P 500, which added 0.6% and 0.2%, respectively.  The technology-heavy NASDAQ Composite and Dow Jones Industrial Average each finished the week down -0.1%.

Commodities:  Precious metals retreated this week, with gold giving up -0.5% to close at $1465.10 per ounce and silver fell -3% to $16.60.  Oil retraced all of last week’s decline rallying 7.3% to $59.20 per barrel of West Texas Intermediate crude. The industrial metal copper, viewed as a barometer of global economic health due to its wide variety of uses, rose for a third straight week gaining 2.4%.

U.S. Economic News:  Hiring surged in November as the economy added a robust 266,000 new jobs last month and the unemployment rate returned to the 50-year low of 3.5%, the Bureau of Labor Statistics (BLS) reported.  The increase in employment was the biggest since the beginning of the year, boosted by the return of nearly 50,000 UAW workers that had been on strike. Hiring was strong across the board with health care, hospitality, and professional occupations leading the way.  Chris Low, chief economist at FHN Financial stated, “This was a strong report, with a solid rise in payrolls, another drop in the unemployment rate, and decent growth in hourly earnings.” The strong BLS numbers are expected to translate into a healthy holiday shopping season.  Sal Guatieri, senior economist at BMO Capital Markets wrote, “All these new jobs will only put an extra spring in the step of holiday shoppers.” Economists really missed, with their average expectation of just 180,000 new jobs.

Manufacturing activity in the U.S. rose to a seven-month high last month, according to the U.S. Manufacturing Purchasing Managers Index (PMI) from IHS Markit.  The PMI’s final reading for November was 52.6, driven by the strongest improvement since April, IHS Markit said. The reading was up 1.3 points from October. In the details, IHS Markit reported production and new orders rose at their fastest rates since January, with both domestic and foreign client demand strengthening.  Despite the increase, though, the reading remained below the long-run series trend. Chris Williamson, IHS Markit chief business economist, said business sentiment "remains worryingly subdued," with expectations about future growth down from earlier in the year. "Firms remain very concerned about the disruptive effects of tariffs and trade wars in particular, both in terms of rising prices and weakened demand," Mr. Williamson said.

The news for the services side of the economy wasn’t as positive as that for the manufacturing side, according to research firm ISM.  The Institute for Supply Management (ISM) reported its index of service-oriented companies such as hospitals, retailers and restaurants, fell to 53.9 last month from 54.7.  While numbers over 50 still indicate expansion, the index has come down sharply from a 13-year high of 60.8 hit just a little over a year ago. In the report, the index for business production in the service sector slumped 5.4 points to 51.6, accounting for most of the decline in the overall survey.  Yet new orders actually rose, as did employment and exports. The index for employment rose to 55.5 from 53.7 suggesting increased hiring for the holiday season, but companies still reported having a hard time finding qualified workers with unemployment at a 50-year low. A similar survey of the services side of the economy by IHS Markit rose 1 point to 51.6 last month.

International Economic News:  While the U.S. economy enjoyed robust jobs growth last month, Canada was going the other way.  The Canadian economy posted its biggest monthly job loss since the Great Financial Crisis. Statistics Canada reported the economy lost 71,200 jobs last month and the unemployment rate rose four-tenths of a percentage point to 5.9% - its highest reading since August of 2018.  The report missed analysts’ expectations by a wide margin. Economists had expected a gain of 10,000 new jobs and the unemployment rate to remain at 5.5%. Brett House, deputy chief economist at Scotiabank, said the drop in jobs puts pressure on the Bank of Canada to cut interest rates next year.  "It really undermines the notion from the Bank of Canada in the last few days that they've communicated that they chart their own course," House said. The jobs report followed a decision by the Bank of Canada earlier this week to keep its key interest rate on hold at 1.75%, where it has been set for more than a year.  Many of the Bank of Canada's international peers have moved to cut rates and loosen monetary policy in response to weakness in the global economy.

In Europe, French wine could face 100% tariffs as U.S. President Trump confronts France over its so-called “digital taxes” on U.S. tech behemoths including Facebook and Google.  The tariffs are in response to the new French technology tax that is said to “discriminate against U.S. companies” and is “unusually burdensome”, according to the Office of the United States Trade Representative (OTR).  The OTR report recommended tariffs as high as 100% on certain French imports including cheese, wine, and handbags. France’s economy and finance minister, Bruno Le Maire, denounced the tariff threat as “unacceptable” and said that Europe would come ahead with a “strong response,” without elaborating on possible retaliatory measures.

Europe’s economic powerhouse Germany continues to face weakness in its manufacturing sector.  Germany’s Federal Statistics Office reported that new manufacturing orders fell by 0.4% from September to October.  Economists had expected an increase of 0.3%. Adding to the dismal report, most German industrial companies said their order books shrank further last month.  Until now, consumer spending has more than offset the weakness in Germany’s manufacturing sector. However, in a separate report there is a worrying sign that consumers pulled back in October.  Retail sales in the Eurozone fell 0.6%, a much steeper decline than the 0.2% fall in September. Rosie Colthorpe at Oxford Economics wrote, “The second monthly fall in a row shows that uncertainty regarding the economic outlook may be starting to weigh on consumers’ spending decisions.”

Asian securities markets advanced on the heels of a couple of economic reports that showed strength in China’s manufacturing sector.  According to research firm Markit, manufacturing grew at its strongest pace in nearly three years. The private Caixin/Markit Purchasing Managers’ Index (PMI) ticked up 0.1 point to 51.8 in November.  In addition, China’s “official” government PMI data showed an increase of 0.9 point to 50.2—an eight-month high, and back in expansion (>50) territory. The majority of analysts surveyed were unimpressed with the improvement, however.  Analysts at research firm Nomura Securities wrote, “We do not think such a rise suggests a bottoming out of the economy.” Analysts from Macquarie, meanwhile, said the most recent data is a sign of "short-term stabilization." But they added in a note that "the worst is yet to come."

Japan is preparing an economic stimulus package worth over $120 billion, two government officials with direct knowledge of the plan stated this week.  In addition, the package would rise to $230 billion when private-sector and other spending is included. The first stimulus package in three years centers on measures to spark consumer spending, and also contains spending on public works to bolster infrastructure.  Prime Minister Shinzo Abe stated “We have crafted a powerful policy package aimed at … helping overcome economic downside risks,” in a meeting with senior government officials. Shunsuke Kobayashi, senior economist at Daiwa Institute of Research wrote in a note to clients that the economic package will help “ease the pain to some extent … and keep consumption from stalling.”

Finally:  It seems that the “baby boomer” generation (those born between 1946 and 1964) has fared far better financially than the subsequent generations throughout every stage of life.  When baby boomers hit a median age of 35 in 1990, they collectively owned 21% of the nation’s wealth. When Generation X (born between 1965 and 1980) hit that same milestone, they owned just 9% of the nation’s wealth.  For Millennials (born between 1981 and 1996), it was even worse. Currently boomers boast more than half (57%) of the nation’s wealth, while Gen X owns just 16%, and millennials 3%. On a positive note, boomers are expected to pass on their estates to their heirs in an upcoming period being called “the great wealth transfer”.  That event may see millennials collecting around $59 trillion in wealth and assets! (Chart from economist Gray Kimbrough via Marketwatch.com)