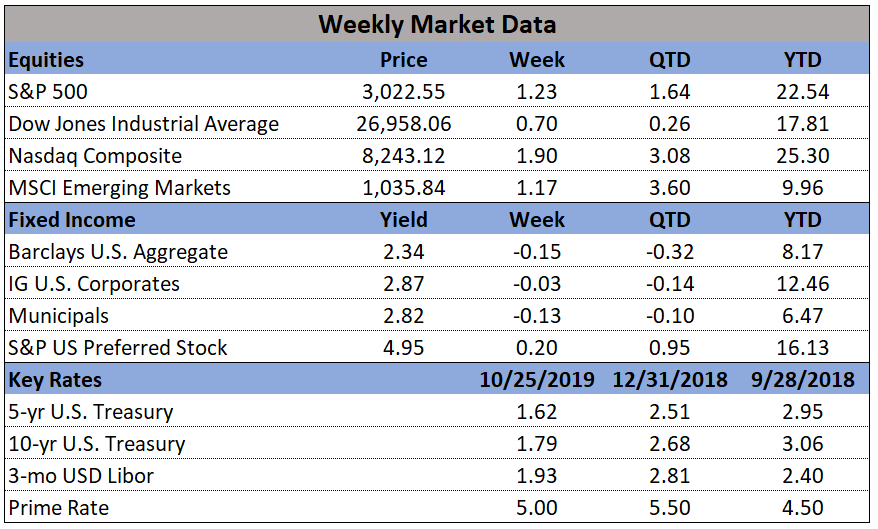 U.S. Markets:  The major U.S. indexes posted gains for the week, and for a third consecutive week for all but the Dow as the quarterly earnings reports continued to pour in.  The technology-heavy NASDAQ Composite led the way with a 1.9% gain, while the Dow Jones Industrial Average added 0.7% ending the week at 26,958. By market cap, the large cap S&P 500 and mid cap S&P 400 each added 1.2%, while the small cap Russell 2000 rose 1.5%.

Commodities:  Precious metals rose along with financial markets.  Gold added 0.8% to close at $1505.30 an ounce and silver rose 2% to $17.93.  Energy rebounded from last week’s decline. West Texas Intermediate crude oil surged 5.2% to $56.66 per barrel.  The industrial metal copper, also known as “Dr. Copper” by some analysts who view it as a barometer of global economic health, rose 1.5% - its third consecutive week of gains.

U.S. Economic News:  The number of Americans seeking first-time unemployment benefits fell last week and stayed near a 50-year low as the U.S. labor market remains strong.  The Labor Department reported initial jobless claims fell by 6,000 to 212,000 in the seven days ended October 19. Economists had estimated new claims would total a seasonally-adjusted 215,000.  Claims fell the most in New York, Michigan, and Texas. The decline in Michigan reflected the end of the month-long strike at General Motors. The less-volatile monthly average of new claims fell by 750 to 215,000.  Analysts note the four-week average gives a more stable reading of labor market conditions. Continuing claims, which counts the number of people already receiving benefits, ticked down by 1,000 to 1.68 million.

Sales of existing homes fell last month as buyers faced limited inventory.  The National Association of Realtors (NAR) reported sales of previously-owned homes dropped 2.2% in September, largely due to the constrained inventory of homes for sale.  Existing-home sales occurred at a 5.38 million seasonally-adjusted annual pace—down from the 5.50 million seen in August. Compared with the same time last year, sales were 3.9% higher despite the monthly decline.  Economists had forecast sales would come in at 5.40 million pace. The median sales price increased 5.9% from the prior year to $272,100. There is currently a 4.1 month supply of unsold homes on the market, up slightly from August but down from the 4.4 month supply seen in September of 2018.  Analysts consider a 6-month supply of homes a “balanced” housing market. Despite the decline analysts remain bullish on housing. Stephen Stanley, chief economist at Amherst Pierpont, wrote in a research note, “Even with the modest disappointment in September resales, overall home sales (new and existing combined) almost certainly exceeded a 6 million pace for the quarter, the best performance in six quarters.”

Sales of new homes declined in September, but remained well above year-ago levels according to the latest report from the Census Bureau and the U.S. Department of Housing and Urban Development.  Sales of new single-family houses decreased -0.7% on a monthly basis to a seasonally-adjusted annual rate of 701,000. The reading is down slightly from the 706,000-rate set in August. Compared to September of 2018, new-home sales were up a robust 15.5%.  Notably, this was the first time since 2007 that new home sales exceeded a 700,000 annual pace for two straight months. By region, sales decreased most significantly in the West where sales volume was 3.8% lower than in August. The Midwest was the only region where new home sales rose from August, up 6.3%.  The government estimated there was a 5.5 month supply of new homes available for sale, just slightly below the 6 month threshold that is thought to represent a “balanced” market.

Orders for goods expected to last at least three years, so-called “durable goods”, fell for the first time in three months.  This drop reflects the weakness in the manufacturing sector that’s lately acted as a drag on the broader U.S. economy. The Commerce Department reported orders dropped -1.1% in September.  Economists had expected just a -0.8% decline. Over the past 12 months, orders have declined a steep -5.4% - the biggest yearly decline since the middle of 2016. Stripping out the transportation sector, orders slipped a much lower -0.3%.  A key measure of business investment, known as core orders, fell for the second month in a row. These orders have dropped -1.1% in the past three months and are running slightly below year-ago levels.

According to research firm IHS Markit, its survey of purchasing managers showed both the manufacturing and services sectors as improving this month.  Markit’s “flash” Purchasing Managers Index (PMI) report for October showed the economic activity in the manufacturing sector of the U.S. expanded at a more robust pace than expected, coming in at 51.5 and beating expectations of 50.7.  In addition, the services PMI ticked up to 51 from 50.9 as expected. Overall, the Composite PMI improved to 51.2 from 51, but nonetheless fell short of analysts' estimate of 51.6.

Sentiment among the nation’s consumers remains fairly optimistic despite a slowing economy, according to a leading survey.  The University of Michigan reported its consumer sentiment survey was revised down slightly this month to 95.5 from an initial reading of 96.  The reading matches the 2019 monthly average, but is well below the post-recession peak of 101.4 set in early 2018. Richard Curtin, chief economist of the survey stated in the release, “The overall level of consumer confidence has remained quite favorable and largely unchanged during the past few years.”  In the details, some 27% of respondents mentioned the negative effect of tariffs without being prompted, down from 36% in September. Surprisingly to many, the move by Democrats to impeach President Trump had little effect on confidence - only 2% of survey respondents mentioned impeachment. Overall, optimism is not as high as it was in 2018, when the Trump tax cuts, higher federal spending and a strong jobs market gave the U.S. economy a big boost.